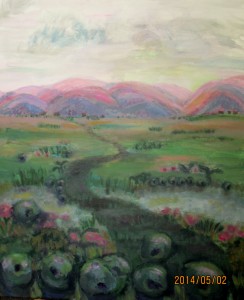 Can we support ourselves on the path to more clarity and happiness? We can practice this adage: “Things are Always Going Well for Me.” as we adventure our daily lives.

The human nervous system grows new neural pathways in the brain—gradually. We all learn bit by bit. We can accept the pace at which we change with understanding and good humor.

Below is an account from one person’s journey on the road of self-mastery. In the incident described below Madeline watches herself play out

acculturated habits of thought, shifts and has a chance to see the miraculous unfold.

This protagonist wished she would pivot faster. M began to behave as she often had, noticed her fear and self-judgment starting to root. Then Madeline began some new thoughts, ones where she thought well of herself and calmed her reactions.  LET SOME TIME PASS. Voila! What was wanted appeared!

The story begins with Madeline feeling more and more beautiful. Heck, she is complimented regularly in her online dating interactions. With the focus on the good flowing, M experienced surprise glances in the mirror where she gaped in wonder at her own visage. How can this be? Apparently I have been beautiful! Who Knew? Wow 😊

Unexpectedly a friend brought her a gift reflecting her lovely visage: a beautiful red cashmere scarf with black pom poms. Discovered in a consignment shop, this item sported a designer label and felt ooey-gooey soft.

After several days she noticed she no longer found her new treasure in the pile of stuff. Where was that wrapping?

Our star could not find it easily. Look here, look there. Run to another room, rummage. Part of her knew she needed to chill out and trust herself to find it (Recommended action😊). But no M kept thinking about it. Imagining scenarios of where it was laid. Yes, she became obsessed, fueled by an old message,”I am bad to lose a valuable.”

What could she do? Our heroine soothed herself. Her habit of reviewing “Where is it? Where could I have mislaid it”  played in her head in varying intensity, intermittently. She began to say, “I owned it only one week. Obviously, my bright future is not contingent on this winter-wear! If I lost it, I remain a sterling person of good character. Let’s make it alright that I cannot find this thing.”

Shame, fear—yes they had influence. “Yes,I may have made a mistake here, But I can accept myself if I lost something beautiful. Of course my beauty is not dependent on owning this piece of clothing.”

After years of inner focus, Madeline had resilience toward Goodness. She knew herself as competent and as beautiful! YAY!

Breathing, breathing. After three days, M went into her art room for some reason and there under a chair in the corner, she spied black pom poms.  OMG! She had accepted the loss of it, loved herself anyway and there it was. What a miracle to find it! This dear woman realized she had created the whole drama. And it was great to be reunited with this lovely present.

Take Aways for Madeline and Readers.

Let’s share our journey of self-discovery and growth. We love the inspiration! Want to comment? Please do!