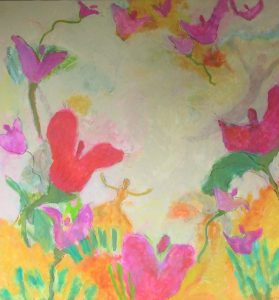 Have you ever heard yourself complain, “They should not behave that way?” Many of us have formulated words to that effect as we observe other folks. Does that point of view serve us?

When we are saying that kind of thing, we are the ones judging the other. In fact, we feel judged and then it is easy to fling back defensive accusatory thoughts similar to what the other said to us. To follow the course recommended in these posts, instead we want to retrain our

reactions and imagine that this person is doing the best she or he can right now. This reformulation feels better in our own nervous systems.

Here is An Illustration

Picture this scene: two sisters with grown children, Edwina and Gertrude. Gertrude has a lake house. She invites sister Edwina.

Are Edwina’s children welcome to go to the lake too? Actually no, not all of E’s kids. Gertrude clarifies that E’s son who has been addicted to drugs is not invited. Gertrude has grandchildren present and fears for the influence of a person who exhibits “user” behavior.

In reaction, Edwina is filled with hurt. Immediately she feels waves of allegiance to her son, she reacts to back him up, ready to defend him. The phone call does not go well after that.

Read attentively.. what did Edwina do to recover herself and reach for feeling better?

Our star Edwina realized she was feeling out of balance. As she calmed she knew she wanted harmony with her sister and she wanted to feel close to her children too.

E pondered, “What had happened here? How can I heal hurt feelings with my sister?”

Inside herself, our heroine recognized that the way in which she defended her son constituted a knee jerk reaction. Yes in that moment E felt Gertrude judging her son!

But in pulling away from accepting the invitation at all, she had sent a message of judgment back at her sister. Now E paused to contemplate what had been her sister’s reasons. Gertrude had felt afraid for her grandchildren—G spoke from a protective mode as Edwina herself had been about her son.

Isn’t this easy to understand? Do either party mean to fuel a big rift? NO!

Edwina changed her thoughts about her sister to more supportive and compassionate ones. That felt better!

In a few days E was ready to take action. From a loving and balanced place, she crafted a note of apology and love to her sister. E extended an olive branch and felt much relief. Using this power Edwina felt peace.

Changing our own thought brings relief. E did not look to G to take back her remarks or apologize. E had the power to shift from a judging posture to one of acceptance. We can all do that.

Do you have examples of pivoting from judging to accepting or the like? I would love to hear them. Please comment.