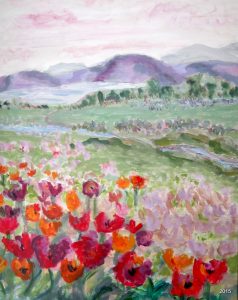 How can we recover from getting hurt by another’s comments, times when we get verbally pushed aside or cut off in making our point?  Someone steals the stage of attention. When that happens, we can soothe ourselves, re-balance and let it go. Sometimes there is an extra gift from the Universe offered in the process… Read about that here:

Mila was attending a spiritual group regularly. She relished the

discussion part of the meeting, where attendees had a chance to react to the session’s lecture and comment on applying it to daily living.

One woman, Amelia,  felt frustrated with a change she wanted to make. ” Oh!’ she cried, “It was taking so long, almost a year!”  Mila had experienced a similar desire for change. had done inner work about it and had succeeded.  Immediately, M wanted to soothe Amelia with a recounting of what she had done and with a compassionate and supportive vibration in her delivery.

Part way through,  another member wanted to “adjust” something she had said. He wanted to clarify one of the formulations in her account. Though she asked to finish, he continued anyway.  On the surface, she did not protest. Inside M was very disheartened. She saw that the attention was taken off her message and the soothing tone of her sharing.

Our star felt wounded and angry. She flowed along for the remainder of the gathering. Then she took a breather from that group as she put focus on re-balancing.

In contemplation, Mila recognized how tense she had felt for weeks. For a few months M had pursued a special project, involving a greater level of confidence.  This dear woman felt that “off kilter” sensation that comes with venturing beyond her comfort zone.

“That person who spoke meant no harm. He just wanted to express himself.

I have much to contribute and I will again.

My future is bright.

I tune to Atmosphere of Good right now.

I am fine here and now.”

Mila flowed with her process, taking the time it took,  and got back to attending those meetings. Now grounded and happy, she had let go of all that.

She had rebalanced. AHHH it felt good!

Before long at another gathering, she and Amelia were standing around the hot drinks area chatting. With ease M found herself telling the incident in her life that paralleled what Amelia was going through. This time she was able to deliver her message in a soothing, compassionate and upbeat tone.

“I relax into trusting that what I need will be provided.

I focus on good and allow the process to unfold.”

As it was time to part, Amelia commented that she had not heard that story before. A’s face changed. She felt lighter, more optimistic and with a new perspective.

Mila realized she had been given a second chance to assist Amelia. It came effortlessly! Mila felt so pleased to offer the example that might do some good. Spirit had handled a way to bring Mila satisfaction!

Then within four weeks, Amelia accomplished her project.  Wow wow, what an amazing unfolding!

Do you have some techniques you use to recover from upset?Do you have a story of second chances and success? Please share! Helps us all to know miracles easily pop!