Here is a formula that works for me: Reach for satisfaction, create a better mood, attract more good into my life.

In this account we read the story of a woman who got into the groove and kept on trucking to feel more and more satisfied. 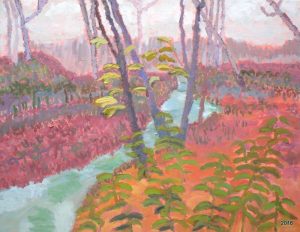 She changed her life so that instead of down, she felt happier more of the time. Please read what else happened as shifted her habits of thinking incrementally over a few years’ time .

Claudine worked as a biologist on a research project.  She has felt frustrated and depressed by the attitudes and actions of her immediate supervisor. He would dictate the rules and the assignments, stifle independence in projects, and limit expression of creativity.  After a time she realized he was actually bullying his direct reports.

About six years ago she found the Abraham Hicks teachings and met me. Diving in, she began paying attention to how she felt and uplifting her mood as she could. Our heroine attended Abraham-Hicks groups and classes, listened to recordings, participated in related groups, paid attention to what she was feeling moment by moment, and soothed herself regularly.

One important means for feeling better was her self expression with jewelry and craft making. More and More she used her personal time creatively. Our star took what she made to community markets, house parties and the like, gaining recognition and respect. The more she put forth her merchandise, the more she found customers. Word of mouth kicked in, and her sales kept increasing.

At Work with a Smile

At her job Claudine contributed much and enjoyed her coworkers. Not only was she contributing with her work as a researcher, throughout her organization, her crafts became known and were purchased by many.  In many quarters our star dramatically increased her customer base, and her work sought after.

Incrementally, her self esteem got higher and higher.  C gained power to master her reactions to her supervisor, to diffuse his unkind comments and ignore his controlling manner. With greater speed this dear woman recovered her sense of fun.

During this period she hunted for other employment and took other inspired actions. She felt more and more in charge of her own fate. When discouraged, she found ways to uplift her thoughts.

After about four years her employment situation popped. A meeting was called by her boss’s boss, and then the three parties talked together. During that exchange her supervisor started badgering Claudine right in front of his boss.

In a matter of days, it was announced her boss not only had resigned but had his last day and was gone.

She has been given a promotion, more money and interesting work.  During the evolution of the situation,  our star won the respect of the “higher ups.”  For years now they have recognized her and treated her as a valued employee.

C practiced a new vibration to feel happier, gained self confidence and had more fun more of the time.  And, she attracted new employment that better suits her talents and pays her greater salary!

Do you have a story to tell? Perhaps one with a slow and steady wins the race application of these tools and attitudes? Please comment!