We love balance and flowing with life events as they happen. Sometimes we react with high emotion, feeling very upset before we have a chance to access our mindfulness and wisdom.

Can you relate? What do we do to recover?

Here is one woman’s story of resilience: 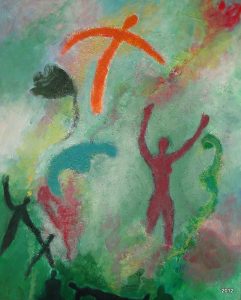 Halley had been moving folders of photographs on her computer as part of a file back up project.

Doing this, she felt trepidation but she pushed herself to get something done.

Later she could not recall the folder into which she had put the items. Now she realized she had felt pressured and had not been paying close attention.

Though she pictured herself as careful and cautious, in that moment her maneuvers were unskilled and spaced out. And she had not been in the flow.

There Halley sat, looking at an empty space where the folders of her photographs used to be. Our heroine freaked out: fear and self blame dominated her consciousness.

Oh my God where were they? How could she do this! She thought she had been insane!

In those early moments of reaction, our star received a phone call from a dear friend. It was like the Force of  Good coming to the rescue. 🙂

She took a pause. The friend offered soothing and support. Our heroine was able to receive that support and became more balanced. Tho shaken Halley wanted to feel better and bit by bit she remembered her power.

Lost were certain summary folders. No, the original photos were not removed. Good to notice. And in this case, she still owned the items that had been photographed, so she could take them again if it came to that.

Focusing herself on taking action to recreate the files felt good. Constructively addressing what needed doing allowed energy to flow and run abundantly. She felt able to do this. Then as she worked, she felt momentum of accomplishment and competence. Better feeling came into her.

Working in rhythm and then resting exemplifies a formula for recovery.  At this time out she made a phone call to connect, enhance her better feeling.  She ate and then she went out for a swim.

During the break, her mind relaxed. Ahhh! To her delight as she stroked through the water, she came to know use of back up files would help. Before this moment using the back up had sounded like too much effort,  a big deal. Now much calmer Halley decided to retrieve the ‘lost” from the storage.

Wow it was easy once balanced and calm: finding and copying most of the needed photos on to her main device. Between the morning and afternoon activity, the “mistake” was remedied, and all was well.

When Halley was filled with panic, it seemed like such a significant problem.  Now just hours later it was clear: thoughts like “I have made a bad mistake. I have caused trouble. ” were not at all true.

Our Dear One had fixed what had been in disarray.   “I am competent: I had what was required to handle this.”– these statements revitalized her.

Good to notice: our heroine reacted and created her own drama. Throughout she had been totally safe and able to handle what presented.  She can make her adventure “ok” and understand she had been, is and will be human and lovable.

Glory Be, it felt so good to feel balanced again. Life was fine and Forces of Good had been on her side throughout. She learned about recovery.. and about backing up files!

Was this article helpful to illustrate how nuts we can get with strong emotion?  Please notice what we think at times like that is not true! Good to know how we can calm down.  Share some thoughts?