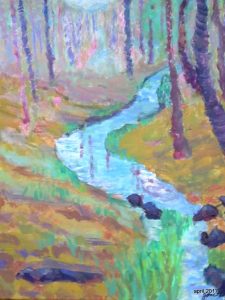 Isn’t it fun to notice when we have something on our minds more things like it come to our attention? Why not pay more attention to this and enhance your enjoyment of the flow of life?

Mandy was doing some online dating. Once in awhile two men with the same first name would show up near in time to one another. Wow, two Richards.

Recently she was very impressed that two men with the same last name were arranging visits with her in the same month.  Then she looked up one day and the name of the street she was on, a bit out of her usual territory, had the same name as those men.

Loretta’s air purifier had need of a filter replacement. After installing it, the device still had its “need for a change” indicator light illuminated. She tried several times and got no result. Then a thought popped, “Had I gotten special instruction on how to do this a couple of years ago? Would I have put a note in the file?”

Yes she had and yes she did. Armed with a paperclip opened up, she got the cover open. As she started to place the clip end in the designated reset slot, in her head our heroine heard a voice, ” This isn’t working.”  Then she woke up, “Wait a minute.  I want to  tell myself that this works easily. ”

In an instant, there was the beep demonstrating the reset had worked. L shifted her thinking and got immediate result. Good to notice!

Nancy had folk danced that day and still she wanted a bit more social time with a friend.  One ran into her at the check out of a store and invited her to take a walk. Truth be told, she felt quite tired after the dancing, but she agreed.

At the friend’s house the two set out for a stroll in the sunshine. Well they had not realized that the wind had come up. Along they went until they were nearly blown off their feet. Know what? It was a very short walk. And Nancy had gotten her social time– and what she wanted.

In her community of friends, Clarice knows a man. Glen,  who currently is diagnosed with a life threatening illness.  After a class, C chatted with another who knows this man and asked if his condition was known. No that friend had not heard a recent report. Clarice flowed along and proceeded with her day.

Doing errands within an hour, our star heard her name called.  In a parking lot she looked to see the family of Glen’s daughter hailing her over. Presto chango she got her update.

That is not all. Less than another hour goes by, our dear one in another store and there before her is Glen himself. Wow! and Good news, he was doing ok, functioning well and able to joke around.

Speak of the Devil!

Isn’t it great to have things of which you spoke show up surprising and delighting you. And, we can put our minds on what we DO want and get more of it.

Got some illustrations from your experience? I bet you do! Please share one or two. It feels so good to remember them and to read them!